Submissions are currently being solicited for an edited collection tentatively entitled “The Joys of Otherhood? Feminist perspectives on voluntary and involuntary childlessness”. Routledge has indicated interest in publication as part of its Gender & Sexuality series with publication possible for 2018.

This proposed edited collection of interdisciplinary essays aims to critically analyze the drivers, consequences, nature and manifestations of childlessness in both voluntary and involuntary forms.

The issue of childlessness has been studied intensely since Veevers (1973, p. 199) identified it to be “a neglected area of family study”. Since that time, childlessness has risen steadily, particularly among women in the West.  Researchers from a wide range of scholarly disciplines, including psychology, sociology, gender studies, social work and social policy have sought to explain the drivers, determinants and consequences of childlessness in both voluntary and involuntary forms in terms of aspects such as emotional state, personal and relational networks and social mobility. A large proportion of this work has embraced a feminist epistemology and/or ontology (Letherby, 1999; Hird, 2003; Blackstone and Stewart, 2003).   While the scope and breadth of interest in this important topic is to be lauded, knowledge progress has so far been hampered by poor linkages across this fragmented and disjointed field of inquiry. This edited collection of original chapters addresses this issue by bringing together theoretical insights and empirical investigations into voluntary and involuntary childlessness, drawing on a feminist conceptual framework. It will be of interest to academicians, students and policymakers in a wide range of scholarly and geographical contexts.

In an effort to propel and expand the discourse, chapters are solicited that more recent, progressive thinking on childlessness, and which examine the topic from the perspective of a wide array of stakeholders and spheres. Chapters that focus on childlessness in the Global South are particularly welcome.

A more precise content of the collection will be determined following a solicitation of appropriate chapters from scholars and experts in the field. However, theoretical and empirical essays that address the following themes are invited:

Section 1: Pathways to and experiences of childlessness

Section 2: The labour market and childlessness

This thematic list is not exhaustive and aligned topic suggestions are welcome.

A wide variety of disciplinary approaches are welcome including, but not limited to: sociology, social policy, cultural anthropology, critical race theory and ageing studies.

Please do circulate this call widely with graduate students, faculty, and independent scholars who work on any aspect of childlessness 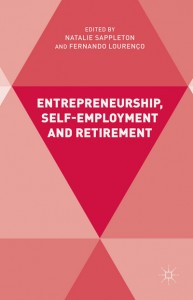 In the context of a rapidly ageing workforce, impending skills shortages, a tightening labour market, upwards shifts in the minimum age at which individuals become eligible for pensions and the gradual degradation of both private and public pension schemes, there is considerable debate in European and North American policy circles on ways to prolong the working life of productive older workers (Taylor et al., 2012). Within this changing social and economic context, workers are encouraged to work longer and to assume greater responsibility for their own retirement decisions.  Self-employment presents a solution that both retains older workers in the labour force while stimulating the economy through entrepreneurship. Furthermore, there is evidence that incidence of self-employment rises with age (Sappleton, 2013). Although the established literature explains this pattern in terms of education and finance (older workers are more likely than younger workers to have accumulated the skills and funds to become self-employed), we observe that a major reason for the greater take-up of self-employment among older workers is the inclination for retirees to launch second careers. For example, almost 42 per cent of UK men over the age of 65 that have remained in the labour force are self-employed (Sappleton, 2013). In the United States, one quarter of workers who re-career after the age of 51 become self-employed and statistics show sharper increases in self-employment rates following retirement than following layoffs (Johnson, Kawachi, & Lewis, 2009). That self-employment so often follows retirement and given that retirement is socially constructed (Phillipson, 1998), we question whether the notion of ‘retirement’ requires theoretical reconceptualization, a topic also debated during the Economic and Social Research Council’s (ESRC) recent Rethinking Retirement seminar series (Loretto & Lain, 2013).

It is also observed that younger (pre-retirement) self-employed workers are less likely than employees to be preparing financially for retirement. British Department for Work and Pensions (DWP) data from 2004-2005 show that 70 per cent of self-employed women and 60 per cent of self-employed men were not contributing to a pension scheme compared to 45 per cent of female and 41 per cent of male employees. The extent to which this lack of financial planning is affected by issues such as financial understanding, wealth or confidences in pensions is not known. Finally, while the role of retirement in career trajectories and re-careering in transitions to retirement have attracted considerable scholarly attention, there exists very little published research explicitly places focus on self-employment and/or entrepreneurship.

In this context, Entrepreneurship, Self-Employment and Retirement presents a collection of nine studies which contribute to a more robust and richer understanding of entrepreneurship, self-employment and retirement in a diversity of settings, including the Netherlands, Canada, the United Kingdom, Singapore and the US, by drawing on both qualitative and quantitative data. By presenting these diverse accounts of pre- and post-retirement self-employment, this volume broadens and enriches existing knowledge about this distinct form of entrepreneurship, and contributes theoretically, methodologically and empirically to an embryonic yet fascinating field.